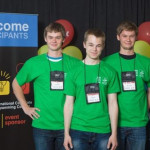 For several decades now these four words stand for the most important programming competition among student teams.