VR – take it slow and steady 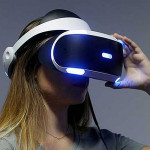 VR is said to be the next big thing with total estimated market value in the multi-billions of dollars. But the reality its adoption will be slow and not necessarily steady.

Researchers Strategy Analytics has produced a realistic take that shows consumers will go for the low hanging fruit first – using lower cost VR headsets like the A$158.99 Samsung Gear VR that will work with its Note5/ S6/S7 and Edge devices. Or maybe start with the low-cost Google DYI Cardboard 2.0 that you can make yourself.

In fact, it predicts that 87% of the 12.8 million headsets shipped will be ‘mobile’ based, leaving 13% (1.7 million) for use with powerful PCs and Gaming consoles. However due to the cost difference between a Samsung Gear and an Oculus Rift – over four times the price – that 13% will account for 77% of the estimated headset revenue of US$895 million. Other players in the PC tethered market include Sony, HTV Vive, and a few niche vendors. 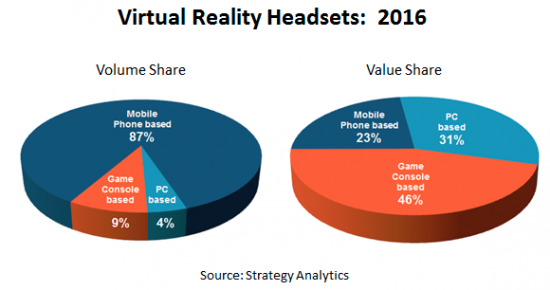 It sees 2016 as a ‘pivotal year’ for virtual reality given a confluence of factors, and also one where managing expectations will be paramount given a dearth of available content and the technical limitations of entry-level virtual reality.

It believes that smartphone-based VR can serve as an effective “gateway drug” to upsell users to higher quality VR experiences down the road while locking them into early but potentially sticky ecosystems.

“Consumers will soon be exposed to an incredible diversity of virtual reality options ranging from ultra-low cost to super premium. While we expect smartphone-based viewers to take the lion’s share of VR headset volumes in 2016 at 87% of shipments, PC and Game Console, powered headsets will dominate value share commanding 77% of revenues.”

He went on to say,

“Additionally, we believe VR has the potential to fuel a new tech spec race in hardware areas such as display resolution, GPUs, storage and 360° cameras.”

“Adoption of the more expensive, high-end PC and Game Console based devices will be limited to a subset of early adopter enthusiasts and hardcore gamers. The high price of these devices will act as a significant barrier to more widespread uptake.

The PC and Console powered virtual reality market is entering the classic chicken and egg phase whereby the major games publishers are waiting on the sidelines until there are enough VR headsets and users in the market for it to make financial sense for them to build a VR library of content.

This is providing independent and niche developers the chance to make a name for themselves before the big boys arrive.”

Beyond the low hanging fruit of diehard gamers, major investment has also been directed towards enabling virtual experiences such as entertainment and sports (pre-recorded and eventually live events), marketing and product retailing, and education/training.

Social and peer-to-peer communications/telepresence are seen by Facebook and other enterprise IT heavyweights as hugely promising areas for virtual reality. Further out still, increasingly capable 3D cameras and apps will allow users to relive (playback) and share experiences to VR headsets with compelling realism.

I don’t know about you but every VR experience I have had – and its getting into hot dinner territory – leaves me both wondrous and nauseous. Well, actually a little more of the latter.

I have run into furniture as I chase an opponent, felt vertigo as I look off a building, and had an irresistible desire to rip the damn things off because I felt too cloistered. But that may be just me.

VR is an incredible technology, but it is also a very personal technology that insulates/isolates you from the world around and substitutes its own reality. There nothing more amusing than to walk into a VR ‘den’ and see all these people sitting, dancing and prancing around like a bunch of opium addicts.

I have tried to run it on PCs and found that lots of RAM, fast SSD and eye-wateringly expensive graphics processor unit (video cards) are needed. Certainly VR is beyond any consumer or business notebook – specialist gaming PCs and notebooks with lots of RAM, SSD, and CPU/GPU power are needed. And because it generates massive amounts of data cloud saves are either too expensive or not supported.

I have briefly seen its cousin AR (Augmented Reality a.k.a. Microsoft Hololens), and it is more about adding to your environment – let’s leave it out of the discussion at present.

So, for now, I am going to leave bleeding edge VR to the experts. One of the best overviews I have seen of the Oculus Rift is at Polygon games and reviews.