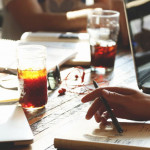 Kafka was developed by LinkedIn in 2011 and after moving to the open-source category, it competed with products such as ActiveMQ / RabbitMQ due to its improved efficiency and scalability.

And with the advent of Kafka Streams API and KSQL in version 0.10, it became easier to use it in applications that exchanged streaming data in real time.

However, Kafka is quite difficult to configure and use, so there is a webinar to explain all the subtleties in its work.

At the webinar the following topics will be covered:

4) Delivery and receipt of messages