In US, Getting Women Into Tech is Everyone’s Business – Study 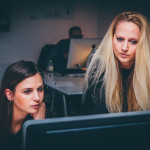 The US needs to move more of its women into tech jobs over the next decade, says a report. That’ll help the women, and it will also help the economy.

Despite efforts to increase diversity in tech, women’s share of computing jobs in the US could be even smaller by 2025 than it is today.

That’s the warning in a report released Thursday by IT consultancy Accenture and nonprofit Girls Who Code.

“Cracking the Gender Code” says multiple players in the States must move to coax more girls toward computing. If they don’t, not only will the percentage of women tech workers fall, widening the industry’s gender gap, the economy will ultimately take a hit.

The report’s findings surprised Accenture Chief Technology Officer Paul Daugherty, given the recent push to get more women in tech.

“I think there is a sense that with all the folks reporting around education and equal opportunity, this is getting addressed,”

The pace at which computing jobs are being created in the US is three times the national average for job creation, the report notes.

But the rate at which women are entering computer science isn’t keeping up. By 2025, women will hold about 1 in 5 computing jobs in the States (or about 20 percent), compared with their current share of 24 percent.

The study points to education as a big part of the problem. As of 1984, 37 percent of college computer science majors were women.

Now it’s 18 percent. Girls’ interest in the subject matter takes the biggest hit in high school, the report says. A girl might not have any friends in a computer science class, for instance, or her school might not offer such a class.

So why does the US need to get more women into technology? To keep pace with other countries and their tech-savvy workforces.

Daugherty said that for America to remain competitive globally, it has to fill the half million open information and technology jobs that are estimated to exist. Right now the US isn’t producing enough computer science professionals to meet industry demand, and moving more women into the field could help solve the problem.

India, China and other nations seem to get it. In developing countries, the report notes, 25 percent of women say they’re not interested in working in computer science or IT. In the States the figure is nearly double that.

There’s another reason too. It’s a huge economic opportunity for women. Accenture and Girls Who Code estimate that females with tech training could earn a total of $299 billion by 2025. But if women don’t pursue these in-demand, high-paying jobs, they’ll miss out.

Currently, there are about 1.2 million women in technology. If things continue as they are, that number will hit about 1.7 million by 2025. The report makes suggestions for how to triple the current number, to 3.9 million, and realize that $299 billion potential.

Recommendations include getting girls hands-on computing experience, changing the perception that computers are nerdy or for boys, and even educating parents; 46 percent believe computing is a high priority for kids, but only 25 percent feel they understand why.

The report also says girls should be targeted in junior high school, where early exposure makes them 18 percent more likely to show interest in the topic through college. They need to be kept interested in high school too. In short, girls aren’t being taught they can use coding to fix actual problems in their world.

A turnaround won’t be easy though. The study notes that 66 percent of computing teachers said they’d rather be teaching something else.

“It won’t get better without intervention,”

“We need to take action and take accountability as business leaders, government leaders, educators, and parents to do things differently to promote this change.”