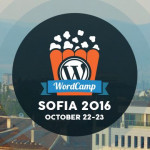 WordCamp Sofia is one of the best established European WordCamps and happened for the first time in 2010. Since then the number of people attending has grown exponentially and the conference attracts people from the whole Eastern European region as well as many guests from other parts of the world.

In 2014 Sofia hosted the largest European WordCamp – WordCamp Europe with more than 800 people attending from 52 countries.

In 2015 we hosted more than 300 people in Arena Mladost Sofia and we hope to see many of the friends we made at WordCamp Europe and their friends back in Sofia in 2016 for a two-day event – a conference day and a contributor day on October 22nd and 24th.

The aim for the conference is to showcase the best of the Bulgarian WordPress community, as well as bring in overseas speakers from the wider international community to share knowledge, trends and experience.

WordCamp Sofia will have at least 50% of the talks in English.