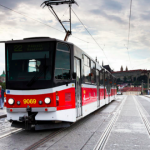 While Android users have long been able to use Google Maps for directions in Prague via public transport, those using Apple’s default Maps program on iPad or iPhone have lacked this functionality, though apps like Jízdní řády IDOS serve as a fine replacement.

Now, however, Apple Maps has expanded its coverage in Europe to include Prague’s public transport system, according to appleinsider.com.

Users can now get directions in Prague via bus, tram, and metro, in addition to pre-existing driving and walking directions.

Prague is the third European city to have its public transport covered by Apple Maps, following London and Berlin. Coverage includes DPP’s metro, tram, and bus routes in Prague, along with some local train services provided by Czech Railways.