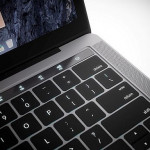 People who really care about MacBook features dug into Apple’s newly released code to find evidence of upgrades, such as fingerprint reading a customizable space for light-up buttons.

Are exciting new features coming to the next generation of MacBooks? Memos from the department of rumors say they’re likely!

Apple obsessives who examined changes to the company’s public computer code have spotted signs that future laptops will include both Touch ID – Apple’s fingerprint reading technology – as well as something called an OLED Touch Bar, according to 9to5mac. The new code is part of the MacOS Sierra operating system announced at Apple’s Worldwide Developer Conference on Monday.

Either you already know what an OLED touch bar is and are currently jumping up and down in excitement, or you need me to tell you that it’s a long strip at the top of your keyboard that you can program with custom, light-up buttons that respond to the touch of your finger.

Apple did not immediately respond to a request for comment.

The rumors are fueled by changes to the code that runs as an interface between a laptop’s operating system and any software application that wants to run on the computer.

That code, called the API, contains programming commands that hint at the new features. But it’s impossible to tell just by looking at the commands whether they really do what you might think.

That means Apple could very well include a command in its API called runNuclearCodes or instantPuppyDelivery, and we’d be none the wiser as to what it actually does until Apple announces its new features.