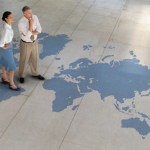 In the post recession phase, when low cost countries like India, China and Philippines remain the most attractive destinations on the global outsourcing map, Europe, at the other end of the spectrum, is also capturing good amount of attention. Although costlier, numerous other factors are driving demand to Europe. Experts are of the opinion that nearshoring activities in both IT and BPO space will have a significant impact on the market this year. Ian Marriott, Research Vice President, Gartner Research, says, “We see lots of opportunities in Europe for services to move within the region and much of the work is going nearshore from UK or US.”

An increasing number of companies are choosing to keep work closer to home and nearshoring is thus being seen as the biggest trend for Europe in 2011. With a huge IT talent pool, multiple language skills and favorable time zones, Eastern European markets can be seen as the destination of choice for nearby countries and for the US. Alexander Semenov, Head of Sales Department, Reksoft, says, “Europe still retains its strong position for outsourcing high-end solutions development.” Lots of new IT trends and developments are reshaping the European ITO space. Cloud is influencing the market in a big way. According to Forrester Report “Market Overview: European IT infrastructure Outsourcing (2011)”, cloud services remain the most discussed service in the infrastructure outsourcing market. Resistance to the cloud will change as enterprises realize the flexibilities that cloud offers.

BPO activities, especially voice operations continue to see significant momentum. This is fairly justified, as there is hardly any other location currently that can support six to eight languages within a single city. Emerging markets like Serbia and fairly established ones like Poland and Ukraine are offering huge potential for growth due to the availability of multilingual skills and good quality resources.

Shortage of resources in one region can drive demand to other regions where resources are available in plenty. This is where Eastern Europe scores big. As per studies and surveys conducted by ‘IT Sourcing Europe’ there is a huge gap in IT talent and resources in the Western Europe. Interestingly, Eastern Europe has seen a significant surge in its IT resources over the last couple of years, which justifies the large number of Western European enterprises queuing up to this region. Dmitry Loschinin, President & CEO, Luxoft, says, “Eastern European countries have shown a significant rise in educated and qualified IT talent. Romania, for example, has seen more than a 12 percent growth in the number of experienced IT professionals employed at companies providing IT outsourcing services. In addition, Ukraine is another Eastern European country that has witnessed similar growth, a nearly 10 percent increase since 2008.”

Nearshoring to Europe is thus on a high and will be driving demand significantly in the future. Marriott points out, “Offshoring looks at a balance of low cost and low risk. When enterprises try to drive down costs, the risks tend to go up.” Offshoring to countries like India, China and Philippines can be a low cost alternative to nearshoring, but there are other factors that balance out or overshadow the cost benefits. When companies start outsourcing, they prefer keeping it closer to home and work with companies that speak the same language and have a cultural compatibility. “This is reason why more percentage of work is going nearshore than offshore” adds Marriot. This holds true especially in case of mid-market companies that are new to outsourcing.

Another factor adding to its global appeal is a mature legal framework.“Benefits from privacy legislation and alignment with legal systems offer high confidence to enterprises outsourcing to countries within the European Union” says Marriot. These regions come out as safer alternatives, especially when data protection and security laws may not be that strong in other parts of the world.

Poland, Ukraine, Czech Republic and Romania are some of the leading countries in the European outsourcing space. Emerging ones like Bulgaria, Serbia, Slovakia etc are also capturing lots of attention. Semenov says, “Customer interest and the providers’ development centers continue to move eastwards. This interest is closely connected with the level of technical education and resources availability in these countries.” There are many new locations coming to the fore. ‘The Central & Eastern Europe IT Outsourcing Review 2010‘ identified Croatia, Moldova, Latvia, Slovenia and Albania as the newly established markets.

Marriot points out, “If we take a broad look at locations within Europe, there are application services, remote infrastructure and business processes being outsourced. MNC service providers are moving to Poland and Czech Republic for infrastructure services and there are also significant BPO centers being set up in Poland.”

Numerous service providers are rushing into the scene to capture the untapped opportunities and to expand their footprint within Europe. Sitel has extended its European operations with its new call center location in Serbia. The company sees lots of opportunities in the region and considers it as a major step in its strategy to double operations in Eastern Europe in the next three years. But why Serbia ? Tim Schuh, General Manager, North EMEA, Sitel, says, “We have always tried to be early adopters in the market. Sitel has significantly expanded its operations in Nicaragua and Poland. We wanted to be the first global outsourcer in the Serbia market.” Its decision to expand into Serbia was based on lots of factors like language abilities, good quality labor, work ethics, infrastructure and so on. Hungary, Romania and Slovakia are the leading locations for voice operations. Poland is the popular location for Non-voice BPO work like FAO and transaction processing.

Indian service providers are also waking up to the realization that having a nearshore presence in Europe is increasingly important, both in the ITO and in BPO space. Mphasis is the recent one to join the bandwagon. Gopinathan Padmanabhan, Head Global delivery Unit, Mphasis, commented in one of its recent press releases, “Poland offers ability to service clients in most continental European languages and is well connected with other Western European business centers. The availability of talent, language skills and an established business infrastructure in Poland made it a natural choice for us.”

What benefits do these locations offer to service providers? Luxoft that has operations in the Eastern European countries like Romania and Ukraine believes that there are many advantages. Loschinin says, “Because Luxoft maintains operations in both countries, we are able to tap into the abundance of IT talent available, and as a result, our Eastern European business is booming. For our global customers, the deep expertise of our engineers and software developers results in higher-quality products and services, and an overall competitive advantage.”

Will it be a Future Destination of Choice?

When it comes to low cost alternatives, Europe has a long way to go, but it will surely be a major contender in selective areas that require better language skills and good quality. Salil Dani, Research Director, Global Sourcing, Everest Group, sums up “In the next couple of years demand is likely to increase with countries coming out of debt crisis. Easter Europe will continue to see demand for high order IT skills and niche capabilities, though the overall scale of operations would be lower than that in India and Philippines.”

For service providers, scaling up can also be an issue in the long run. General Manager, Andrei Pronin, Auriga, comments, “The providers tend to be of a smaller scale, and can put together large teams slower than competitors from other locations. However, for traditional R&D projects that’s not a problem, as big teams are rarely needed.”

Pointing to future prospects, Schuh says, “It is little bit of a mixed bag. The countries are in different phases in terms of their recovery from the recession. There is very positive momentum in the Eastern Europe. But it’s a little tougher in countries like France and Spain.”

Although experts have mixed reactions about the potential that Europe holds, service providers seem to be very positive. Loschinin reveals, “We are predicting that more and more enterprises will consider Eastern Europe as a strategic outsourcing destination and we are expecting significant business growth for our operations within Eastern Europe.”