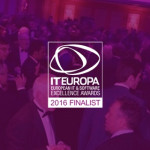 IBA Group announces its inclusion in the list of finalists for the IT Europa’s European IT & Software Excellence Awards 2016, the leading pan–European awards for Independent Software Vendors (ISV), Solution Providers, and Systems Integrators, and their vendor and distributor partners.

IBA Group was selected finalist in the ISV category Information & Document Management Solution of the Year. For the first time since the IBA Group’s involvement in the contest, a solution implemented by IBA Gomel, the company’s second largest development center, was submitted and became a finalist.

Now in their eighth year, this year’s European IT & Software Excellence Awards attracted over 400 entries from more than 31 countries. Of these, 86 companies from 21 European countries are represented among the finalists.

The winners will be announced at the European IT & Software Excellence 2016 Awards Dinner to be held in London on April 14, 2016.

IT Europa organizes The European IT & Software Excellence Awards to recognize the crucial role that ISVs, Solution Providers and Systems Integrators play in the delivery of real world solutions.

The awards are given for IT solutions that get to the heart of customer issues, delivering better business, a clearer understanding of data, and more efficient and profitable outcomes.

John Garratt, Editor of IT Europa, who headed the judges’ panel said:

“This year has seen more entries than ever, and an even wider spread of project types — from mobility, security and management to software–as–a–s ervice packages for key vertical markets, and from data–driven systems using the new power of analytics to others which effectively replace costly old systems with new and far more efficient apps, increasingly driven in the cloud.

The result is the best–ever advertisement for the capabilities of European IT, and we could not help but be impressed by the skills on display and the effort that has gone into effective IT delivery.”

The last year’s award–winning solution was the automated fare collection (AFC) system that IBA Group developed for public transport of Minsk, the capital of Belarus.

IT Europa mentioned the AFC system in its press release, saying that “there were notable triumphs for companies from across Europe, with projects ranging from an open–source solution saving money in the UK’s NHS to automatic fare collection in Minsk.”