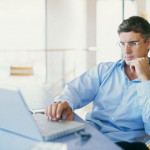 If you’ve paid any attention to Intel’s developer event in San Francisco this week, you’ve probably gathered already that there’s almost no chip news at the show.

Intel has moved up the food chain, so to speak, and is showing developers what they can build with its technologies rather than focusing on new components.

It makes sense, since with PCs on the wane Intel needs developers to get creative with its products. It can no longer flash a faster Core i7 chip and expect them to go do something interesting with it, because PCs nowadays just aren’t that interesting. Instead, it needs to show them what else they can do with its latest chips.

So we’ve been hearing a lot about robots, depth-sensing cameras, smart vending machines and bracelets that log you into your PC.

It’s important stuff for Intel, and entertaining to watch a sensor-equipped BMX bike jump over the head of CEO Brian Krzanich. But there’s not a ton of big news we hadn’t heard about before.

Still, here are 5 of the most interesting things announced so far, and since we’re already halfway through IDF there probably won’t be much else.

Intel didn’t talk much about its upcoming Skylake desktop CPUs this week, but it did reveal that the chip has an integrated DSP used for a feature called Intel Smartsound, whch will allow computers to listen out for audio signals without using up too much power.

It worked with Microsoft to build an upcoming technology for Windows 10 called Wake on Voice, which will let you walk up to a Windows 10 in sleep mode and bring it to life by saying “Hey Cortana.” Some smartphones already have this always-listening feature, but it’s not available yet on a PC.

The catch is, we’re told Wake on Voice won’t arrive with the first Skylake chips, which means it won’t be supported in the first wave of Windows 10 PCs.

OK, there was a little bit of chip news. Curie is Intel’s tiny system-on-chip for wearables. Unveiled at CES earlier this year, it’s as big as a fingernail and includes a Quark microprocessor, Bluetooth radio, accelerometer and gyroscope.

Intel announced this week that “select” hardware makers will get their hands on Curie to build products in the fourth quarter. Regular developers will get it too at the Maker Faire in Rome, Krzanich said, which takes place in October.

As well as rings, bracelets and fitness trackers, Curie can be embedded in just about anything. Intel showed how you can track the speed and position of a BMX bike that apparently had Curie chips on its handlebars and saddle.

It also released some new SDKs, including one called Identity IQ, which can authenticate a wearer’s identity. That could eventually let you unlock your PC using a smart bracelet, as Krzanich demonstrated in his keynote. 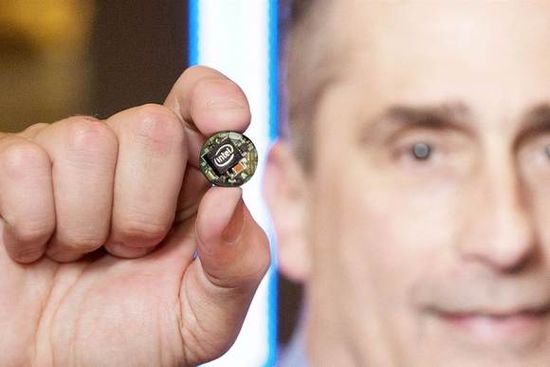 It basically allows a computer to “see,” and Intel has already shown a drone navigating through trees in the woods using RealSense.

It’s already in some PCs, and at CES Intel showed the first prototype smartphone with RealSense. This could allow several handy uses. RealSense can be used to measure distances, so you can go furniture shopping and use your smartphone as a tape measure.

It can also take photos that allow you to adjust the focus later, a bit like a Lytro camera, and it can be used to scan objects for sending to a 3D printer. RealSense is the most pervasive technology at IDF.

It’s also being shown in a vending machines that can tell the sex and age of the person standing in front of it, and in a robot bellhop that will deliver drinks to your hotel room. it’s also in gaming systems, including a new camera from Razer to use on the Twitch game streaming service. 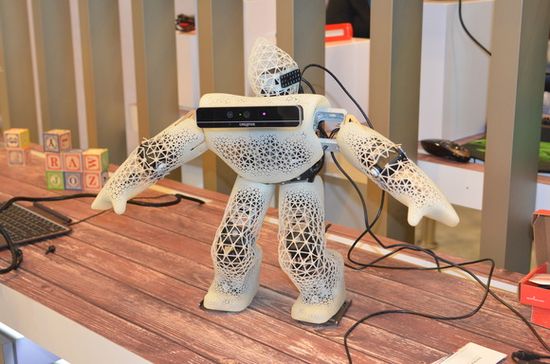 A robot that uses Intel’s RealSense for computer vision

Intel will launch the first products next year based on 3D XPoint, a new memory type it developed with Micron.

Intel claims it will be 10x as dense as DRAM and 1,000 as fast as NAND Flash – although speed tests on stage revealed the initial performance gain to be closer to just 7x.

Under a new brand called Intel Optane, Intel will launch SSDs for servers and PCs next year, and also memory DIMMs for servers.

Intel says 3D XPoint will supercharge everything from PC gaming to in-memory databases.

Strange but true, Intel has partnered with United Artists to produce a reality TV show called “America’s Greatest Makers”. It will follow the trials and travails of inventors cometing to build the greatest wearable or gadget using Intel’s Curie chip, and the winner will get a $1 million prize.