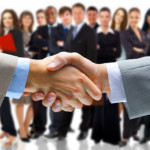 There are many good reasons why businesses are drawn to international outsourcing. It is a strategy which can help achieve greater efficiencies, reduce operating costs and enable businesses to refocus on their core activities and strengths. It can also provide the extra flexibility needed to respond to changing market trends, business models and developments in technology. For all those reasons the volume of outsourcing activities has risen even more in response to the current challenging economic conditions.

Despite the pros to outsourcing, businesses choosing to outsource need to be aware that doing so carries the risk of a dispute. In fact, current trends show that international outsourcing arrangements are particularly susceptible to such risk. There are, however, ways in which businesses deciding to outsource can prepare themselves for such an eventuality.

Recent numbers show just how common international commercial disputes are. The Economist Intelligence Unit (EIU), working with global law firm Reed Smith, recently conducted a global survey of executives. It revealed that one in four companies was involved in an international commercial dispute in past two years. The most common causes of disputes were breaches of contract, many of which resulted from incorrect interpretation of the agreements.

As for the most common underlying substance of disputes, infrastructure, which was on the top of the list in the early 20th century, has been replaced by technology and intellectual property (IP). This is hardly surprising if we consider that a recent survey conducted by ASIS International estimates the value of stolen corporate IP to be as high as US$1tn worldwide. At the same time there are big differences between approaches to IP regulation in different regions, while even the most developed jurisdictions, such as US, are still figuring out the exact limits of IP law. The EIU survey shows that 35 per cent of respondents who were not recently involved in international disputes see the theft of IP as the most likely cause of disputes they may face in the next two years in the BRIC markets.

Such trends do not bode well for international outsourcing agreements. Technology and IP issues usually lie at the very heart of such contracts, and they are notoriously long and complex, which increases the potential for misinterpretation. Recent examples of big outsourcing disputes which ended up in court include the dispute between Ericsson and H3G, and the case between BSkyB and EDS/HP, which resulted in a payment of £318m in damages.

Given that the risk of disputes cannot be avoided, it is important to know how to mitigate their potential impact. The first issue to consider is what mechanism should be used to resolve them. The default position is that the case would be heard by the host country’s court. However, this may often not be a satisfactory solution. For one thing, many popular outsourcing locations such as China, Russia and Mexico have relatively weak intellectual property laws. Additionally, many offshore jurisdictions still lack fully mature legal systems altogether. This is one of the reasons why India, which benefits from a legal system based on English common law, remains a leading destination for outsourcing. Indian courts are, however, notorious for  being slow to resolve disputes.

One solution is for the contract to specify that it is governed by the law and courts of a different jurisdiction. Such “forum shopping” is relatively common, with English law and New York law often being regarded as the standard for global business contracts. Most courts, however, will not be prepared to hear a case which lacks adequate connection to the given jurisdiction. At the same time the host country’s courts will often lack necessary expertise to consider the dispute from a foreign law’s perspective. Lastly, selecting a more adequate forum will not help with enforcing the judgment, which needs to be done in the host country and may prove to be very difficult.

Another popular option is arbitration. One of the chief advantages of arbitration is its considerable flexibility which grants parties the freedom to select what laws or even non-legal standards will be used to resolve the dispute and who will make the final decision. This means that the case may be heard by a retired judge with adequate experience in dealing with similar matters or even an industry expert, for example in the field of technology or IT project development. This will often be of huge benefit to outsourcing agreements involving complicated legal or technological issues. Parties also retain far greater control over the time and cost of the process than when submitting the case to any national court.

Arbitration also helps to solve the problem of enforcement. Currently over 150 jurisdictions worldwide are covered by the New York Convention which enables quick and effective enforcement of arbitration decisions. This creates a network bigger than any treaty or arrangement providing for international recognition of court judgments.

Another benefit of resolving international outsourcing disputes through arbitration is the opportunity to keep the matter confidential. By contrast to court hearings, arbitration gives parties an opportunity to keep their trade secrets, intellectual property and other commercially sensitive information from entering the public domain. Even the existence the dispute can be kept confidential, which sometimes can save one or both parties a significant amount of embarrassment.

The downside is that reaching a settlement through arbitration may be harder in some of the emerging markets where mechanisms allowing for arbitration may not yet exist. This is the case for a number of countries in Africa and Latin America. Parties can still try to submit the dispute to one of numerous arbitration organisations, such as the Chamber of Commerce or London Court of International Arbitration, but they may run into problems if parallel proceedings in the host country are started and cannot be stayed. Fortunately, the number of bilateral investment treaties (BITs) has grown in recent years. BITs usually provide alternative dispute resolution mechanisms which can be used by parties in the contracting states.

When entering into international outsourcing agreements the risk of disputes must be considered from the outset, i.e. at the contract drafting stage.  It is important to know which dispute resolution mechanism will work best for the agreement given the nature of the parties, the subject matter and the jurisdictions involved. It is also important to make sure that if arbitration is selected this is clear and backed by adequate procedures for initiating the process. This will help avoid a situation where the party trying to rely on the arbitration clause finds itself in court struggling to persuade to get the proceedings stayed. The arbitration clause should also ensure confidentiality of the process, extending to the very fact that a dispute exists.

The risk of dispute in outsourcing transactions cannot of course ever be eliminated. In the modern global market, it is simply unrealistic to try and ignore the benefits attached to the international outsourcing opportunities owing to concerns about likely disputes.  It is, however, prudent to seek to minimise the risks associated with disputes and one way to achieve this is to ensure that the dispute resolution mechanism in the outsourcing agreement is clearly drafted and appropriate to the particular transaction.

Switching IT Outsourcing Providers Easier (and Less Costly) Than Ever