IT, BPO Attracts Most Private Equity Investments in 2012 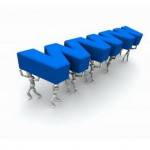 The total investments by PE firms over the past five years in India now stands at about $41.4 billion across 2,036 transactions, Venture Intelligence said in a report.

The latest data revealed that PE investments in October-December 2012 declined 32% to about $1,010 million compared to the $1,490 million invested in the same period in 2011. “PE managers are more being judicious and taking longer period to deploy their funds,” commented KEC Raja Kumar, Founder & CEO of leading Bangalore-based PE firm Ascent Capital. The fact that the environment has continued to be challenging for new fund raising has also contributed to the investment slowdown.

The two largest PE investments announced during 2012 were both in the BPO sector: the $1,100 million buyout of medical transcription specialist M*Modal (formerly CBay Systems) by JP Morgan unit One Equity Partners and the $1,000 million investment by Bain Capital and GIC in Genpact (by buying out the stake of existing PE investors General Atlantic and Oak Hill). (Both of these transactions happening in the Jul-Sep 2012 quarter contributed to the period becoming an outlier.) The next largest investment was Morgan Stanley’s $210.5 million investment in Continnum Wind Energy, a Singapore headquartered firm developing wind assets in India’s Kutch region.

With 162 investments worth about $3,243 million, information technology and IT-enabled services (IT & ITES) companies topped in terms of both investment value and volume during 2012. The $150 million fourth round investment raised by e-commerce leader Flipkart was the next largest after the two mega BPO deals in the IT industry. Powered by four investments worth $100 million or more in the hospitals segment (Manipal Health Systems, Care Hospitals, DM Healthcare and Vasan Eye, the Healthcare & Lifesciences industry absorbed $1,225 million across 48 deals. Led by Warburg Pincus’ $145 million buyout of listed NBFC firm Future Capital, the BFSI industry was the third favourite accounting for $890 million across 43 deals. Energy companies – powered by the interest in wind power development companies in the first half 2012 – came in next attracting $478 million across 20 investments.