IT Giant Arrives in Košice, Slovakia 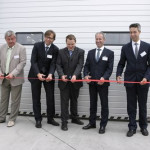 Freudenberg IT will have customers mostly among medium-sized and production companies in European countries.

Global specialist in information technologies, company Freudenberg IT, joined the list of tenants in IT Valley Košice, with the plan to create some 200 new jobs by the end of this year.

“Freudenberg IT Košice will become a twin to the successful subsidiary in the city of Puebla in Mexico, opened two years ago, which currently employs more than 180 experts,”

Similarly to other branches, the Košice subsidiary will have equal position within the group.

“This means that the employees can apply for open positions in the company across the world,”

Slovakia is already the seventh country where the IT firm will open a subsidiary.

“The main reason why new players come to Košice or the already established companies expand there is the high productivity and quality of labour force, low fluctuation, high loyalty of employees and experienced management,”

Freudenberg IT will have customers mostly among medium-sized and production companies in European countries.

The Košice branch will provide IT services and development of software solutions not only to European, but also American customers, the Korzár daily reported.