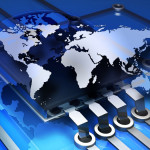 The world IT outsourcing services market includes a number of countries and regions which due to their specific conditions are attractive for starting such a business. In fact a certain geographic division of labor can be observed in this field. Throughout the history the division of labor was driving the universal economy ahead, do no wonder that outsourcing is so popular in the software development industry. Some countries are best in producing ideas and concepts, while others provide better conditions to do the technical part of the job.

IT outsourcing services companies are mostly located in less economically developed countries which nevertheless have prominent level of technical science and engineering resources. China and India were monopolists in this market for a long time utilizing the big gap between local prices and prices in Western Europe and USA. Today we certainly can speak about another great opportunity: European outsourcing.

Eastern European region contains a number of countries which are different from each other and from their Western neighbors by economy level and by industrial development. Most of them were under the influence of the USSR for some period of time and had economic hardships after its collapse. Though many have joined the EU by this time, they still have much lower prices and salaries.

Industrial downfall in Eastern European countries urged people to look for new markets where they could gain better positions. Software development turned out to be a real alternative. Being purely intellectual branch (a number of brains – that’s all you need to start), programming does not require big expenditures for starting a new project. The only thing one has to invest in is good education.

IT Outsourcing To Ukraine – A Nice Alternative?

Among other members of the Eastern European region, Ukraine is one of the most attractive for Western IT companies. At the moment it possesses about the biggest quantity of software and web professionals, while salary levels here are among the lowest in Europe. As for education, it is one of the Ukraine’s strong qualities – there a multiple big technical universities in major cities of the state. Hundreds of IT students are graduated each year creating rich substrate for national software development businesses. On the other hand, Ukrainian IT companies are strongly oriented at collaboration with Western European and American businesses and therefore IT outsourcing is very popular here.

In the beginning of 2012 there were nearly 6 thousand IT outsourcing services companies performing in Ukraine. They are working with clients from various places. Major countries outsourcing to Ukraine are Germany, Switzerland, Netherlands, France, Italy, USA, ANZ. Geographic location of the country is rather encouraging: it takes only about couple of hours to get here by plane from any of Western Europe’s cities. This is a great advantage as a project owner who has outsourced his project to a Ukrainian team of developers can easily pay visits to his collaborators’ location from time to time in case he needs to interact with them personally.

So Ukraine is an emerging regional leader of IT outsourcing in Eastern Europe. As the demand for IT outsourcing services is growing faster and faster worldwide, it is possible that increasingly more software development companies will consider using the services of Ukrainian IT outsourcing vendors. Well, what about joining this promising trend?