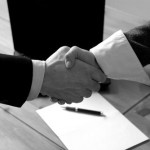 Microsoft has been pursuing a more collaborative approach under CEO Satya Nadella, working with longtime rivals like Salesforce, VMware and Apple. There hasn’t been much love between Microsoft and Google, though, but an announcement Wednesday may signal an easing of those tensions.

Google and Microsoft have reached a broad agreement on patent matters, with a legal settlement ending some 20 lawsuits between the companies in the U.S. and Germany. Financial terms weren’t disclosed, but the deal brings a laundry list of lawsuits to a close.

“Microsoft and Google are pleased to announce an agreement on patent issues,”

they said in a joint statement.

“As part of the agreement, the companies will dismiss all pending patent infringement litigation between them, including cases related to Motorola Mobility.”

They also agreed to collaborate on patent matters and work together “to benefit our customers.”

The suits that have been settled include those related to mobile phones, video encoding and wi-fi technologies. That doesn’t mean Microsoft has given up its campaign to collect royalties from Android device makers for the mobile operating system’s alleged infringement of Microsoft patents.

It’s not clear from the statement what patent matters the companies will be working on together in the future, but we’ve already begun to see shades of that taking place. The two firms agreed earlier this month to work together (alongside other firms like Netflix and Mozilla) on a royalty-free video codec.

It remains to be seen if the settlement will lead to more work between Microsoft and Google in other areas. A major sticking point for consumers has been the lack of a Google-made YouTube app for smartphones and tablets running Windows.