CES 2015: Searching for the Smartwatch Market 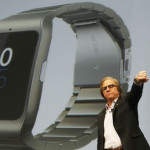 For the smartwatch industry, the 2015 Consumer Electronics Show has served as a sort of massive strategy meeting to figure out how to turn the wristwatch into a technology device.

The panel speaking at a smartwatch session at CES in Las Vegas this morning brought up an interesting parallel – how the traditional watch made its way to the wrist in the first place.

Utility use cases like the military, which mandated a wrist-worn time piece to coordinate operations, eventually turned a device that most people kept in their pockets into something they had to wear on their wrist. Tech companies today are trying to make a similar transition for smartphones.

The more personal it is, the less it feels like software.

This ambition doesn’t necessarily mean that the smartwatch market will ever grow to an equivalent size of the smartphone market. The general consensus among the panelists was that it never will. But the wrist is “valuable real estate,” the panel agreed, and it presents a handful of opportunities. What the smartwatch industry needs to determine is which customers make up those opportunities, and how they’re going to reach them.

The panels’ moderator, Creative Strategies president Tim Bajarin, opened the discussion with a blunt observation with which many of the panelists agreed.

“I have yet to find a killer app that makes me want this,”

Dennis Miloseski, vice president of design at Samsung, said his company is less concerned with finding a single wide-reaching application that will drive widespread adoption, but is more focused on crafting a smartwatch that will enhance the mobile lifestyle of the people who use it.

“I personally don’t think that we as a society should be staring at our screens all day,”

“We [at Samsung] believe in a philosophy where you can still feel connected to a technology that’s important to you without having to take these technologies out [of your pocket],”

“From a software developer’s perspective, when I hear people say there isn’t one killer app, we’ve actually heard people say that for every technology,”

Bonforte pointed to the possibilities created by sensors on wearable devices, which give developers a deep resource of data to rely on when building apps.

“The more important software development that’s been happening is the adoption of and the low cost of sensors,”

“The more sensors we have, the more we can make software personal. The more personal it is, the less it feels like software.”

Sensors are one of the smartwatch’s unique advantages, which could be critical in the effort to attract customers to a new device category. Unlike the smartphone, which alleviated consumers of having to carry a cellphone, digital camera, and MP3 player simultaneously, smartwatches will need to rely on the device’s distinctive features to build a market.

Instead, customers will only adopt the devices if they do something for them that no other technology does, Holove added. That’s part of the reason his company entered the market with a health and fitness device that provided in-depth data on the user, and only added notifications for messaging and phone calls to their smartphones afterward.

Steve Sinclair, vice president of product marketing at Motorola Mobility, said his company determined that design was a chief priority primarily because it was asking customers to wear a new device on their bodies.

“What we discovered was while you can design a product with all the great tech built into it, it wasn’t going to gain the mass adoption like we see today with smartphones until we can develop a product that people want to wear all day long,”

That reality of the market presented an entirely new challenge – creating a design that appeals to consumers at large, despite their individual and ephemeral fashion preferences.

The enterprise was suggested as a potential ground floor for the smartwatch, given that employees who travel often don’t spend the bulk of their time staring at PC or smartphone screens anyway. Those with busy schedules and frequent meetings might gravitate toward a device that sits on their wrist and notifies them of important events at the right time.

Bonforte, however, insisted that the level of detail that sensor data can bring to applications will appeal to consumers on a more intimate level. He pointed to a “network effect” of market share growth, in which early adopters lead their close family and friends to buy the devices in order to connect with each other. Business adoption could follow this path as it did with smartphones, with passionate consumers leading them into the workplace, Bonforte said.

As it stands, the smartwatch market is currently limited to early adopters. But many expect 2015 to be a big year for the technology; Gartner predicted in September that smartwatches will account for 40% of consumer wrist-worn devices by 2016. The question isn’t whether there is a market for smartwatches, but how the industry is going to find it.