Slovakia Lacks Some 10,000 IT Experts, Situation Is Worsening 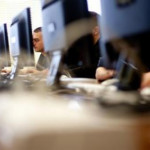 There is a lack of around 10,000 specialists in the IT and telecommunications (ICT) sector in Slovakia, said Slovak IT Association (ITAS) director Mário Lelovský on June 27.

“This phenomenon, unfortunately, isn’t getting better … quite the opposite, the figure is growing,”

said Lelovský as cited by the TASR newswire, adding that Slovakia might lack around 20,000 specialists by 2020.

Lelovský opines that one of the reasons is that while a high birth-rate generation is retiring, behind them will be low-birth-rate generations – starting at the outset of the 1980s. This means that fewer students are studying IT specialisation. Another reason is that firms have higher demands for IT professionals.

There are around 45,000 people working in this field in Slovakia, said Lelovský, adding that by 2020,

The ITAS director said that it’s really difficult to change the state of affairs.

“Reform of the school system as well as the reform of the education and training of university and high school IT specialists might help change the situation,”

Lelovský added that there is also a lack of university lecturers in this field, which is related to the low salaries.

“Salaries in the IT sector are much higher than those of IT specialists in the educational system,”

Lelovský believes that the gap between the demands of firms and supply of IT specialists should be narrowed by activities aimed at identifying and educating young talent.

The Network Academy Games (NAG 2016) competition for high school and university students is one such initiative, the results of which were announced on June 27.