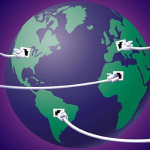 Among emerging destinations, there were three delivery centers reported by leading buyers and service providers in Ghana. Despite political turmoil in recent months in Northern Africa, players have continued to demonstrate interest from sub-Saharan Africa.