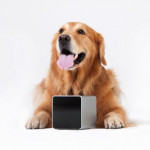 Macworld/iWorld 2014 and SF New Tech have partnered to produce “6 About to Break”, the first-ever competition spotlighting the most innovative apps, accessories, software and utilities uniquely positioned to breakout in the Apple marketplace. The six final products span mobile, wearables, home automation, 3D and social media.

Petcube, Inc., a San Francisco based startup founded by Ukrainian developers, is a home gadget that enables users to watch, talk and play laser games with their pet through a mobile phone app.

Petcube was named a “6 About to Break” winner by the jury and audience vote.

Petcube was funded with Kickstarter and became the most successful crowdfunded pet product in history. The first batch of gadgets will ship in May 2014.