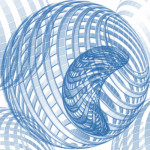 Currently the 2nd largest city of Romania, Cluj-Napoca is constantly climbing rankings in the ITC field, namely for its software development activity. Hosting near 250 ITC companies, with roughly 5000 active software engineers, Cluj-Napoca’s software market has expanded by 48.8%  in the last two years. Bearing innovation and growth in mind, 2012 culminated with the setup of the Cluj IT Innovation Cluster.

Based on our latest data, 2013 opens the door for new collaborations forms, new projects and new strategies.

Formerly known as the 1st hardware centre in Romania, Cluj-Napoca went through massive changes during 2012. The disinvestment strategies of a gigantic Telecom Corporation and the latter general economic landscape meant a 40% decrease of total market value, but also let software development win market shares. Today, software development holds 18%  of the total local market expressed in net revenues, against 6% recorded in 2009. 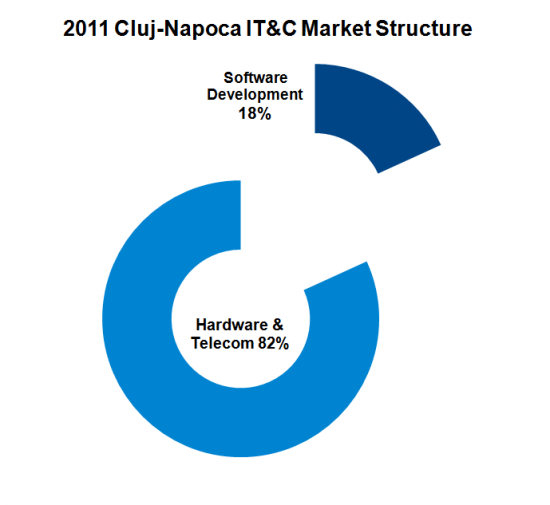 Despite the market contraction from a total value of EURO 1.09 billion in 2011 to an estimated value of 0.6 billion in 2012, the software development sector registered considerable growth.

New investments from both domestic and Fortune 500 international companies have been registered in 2012. Along with the new settlements, the strategic outlook for Cluj-Napoca has been clarified. The city is ought to be the next Silicon Valley of Romania in direct connection with the biggest ITC markets in Europe and worldwide. 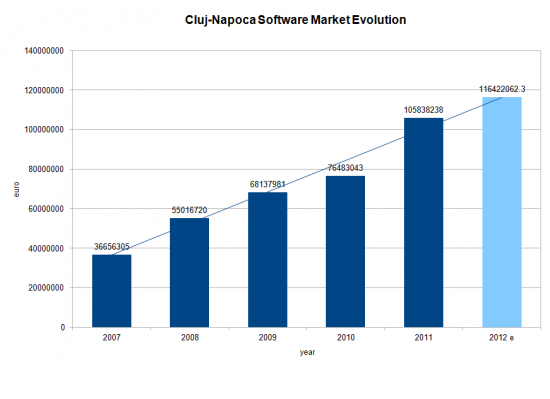 For 2011 we recorded a total growth of 38.8% of total net turnovers while we estimated a cautious year-on-year growth of 10% for 2012. The average profit margin during 2010-2011 was of 10.5% from the total net turnover.
Due to the recent foundation of the Cluj IT Innovation Cluster, this positive trend is expected to continue and radically reshape the local landscape.

A key growth factor for Cluj-Napoca is the set of selected partners that the business community attracts year by year. Due to a specific mix of cultural traits, diverse ethnical presence (Romanian, Hungarian and German) and elite academic institutions, the city has become a preferred destination for outsourcing and offshoring.

Germany is #1 Partner and Investor in the software development sector of Cluj-Napoca. “Cultural proximity, language skills, working ethics and well established socio-economical leverages with the German business community are the foundation for the good cooperation.” Declares Mr. Levente Szélyes – CEO, Codespring and he continues: “On top of that, Germany is Europe’s #1 ITC market and informally nominated Europe’s Silicon Valley having diverse industries and a cultural attitude towards performance and diligence”. The search for reliable partners and creative talent make Cluj-Napoca a healthy choice.

United Kingdom is the second largest ITC partner for Cluj-Napoca, closely followed by USA investors and customers. Netherlands partners have also a noticeable presence and have consistently promoted the idea of continuing strategic partnerships with Cluj software professionals. Finland and fellow Scandinavian countries put their mark on the city’s ITC progress.

The privilege of hosting 11 Universities in Cluj-Napoca, delivers about 1000 ITC graduates per year. In partnership with the corporate community, many R&D projects are being conducted. The mind-set for innovation and personal contribution to assigned projects is being shaped since the early stages of the profession. 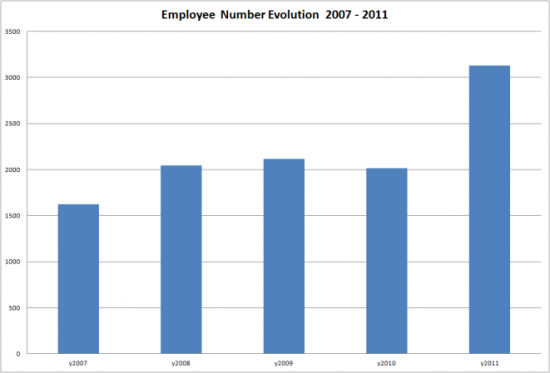 Figure 4: Employee Number Evolution for the Software Development sector in Cluj-Napoca; source: own calculation based on 2011 Cluj Finance Administration Data

As one can observe on the table above, companies hired more in 2011 compared to the years before. The same trend was noticed in 2012. Part of the 55% growth recorded on the software employment market of Cluj-Napoca in 2011, is due to the changes of the work regulation. Today fewer professionals are working as independent authorized practitioners, but the option is still a good choice.

In 2012, Romania has reached pole position in Deloitte’s CEE Technology Top 50. In the same time, Jones Lang LaSalle allowed the 9th rank in the Top 10 Outsourcing Destinations Globally. The key driver proves to be the added value that most Romanian providers manage to bring on the table.

Recent deals and agreements strive to fine-tune resources, costs and expected business impact in order to reach the best results. Whether we speak about staff augmentation, consulting, managed services, cloud-based outsourcing, offshoring or partial outsourcing, Cluj-Napoca ITC community constantly readapts to evolving needs. We estimate that 2013 will be a year of growth, profit restoration and redefinition of Cluj-Napoca’s strategic posture on the ITC map.