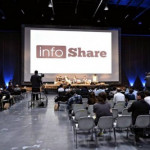 On May 22-23, Gdańsk held the biggest (in Poland) IT and New Media Conference. This huge event has been organized since 2007 and each year gathers even larger group of the participants.

Presentations led by the experts, interesting workshops, start-up zone (including contest for start-ups), additional events like networking party or beach running and what’s most important – positive atmosphere to share the new ideas and knowledge – these indeed speak volumes about the quality of the infoShare event.

This year Goyello has again become a Golden Sponsor of infoShare. Our team was present not only at our booth but, above all, out there in the crowd, taking part in the presentations and making contacts with the potential clients and employees of Goyello.

“Get to know how to optimize your social marketing efforts just like Ola (the Dutch Algida) and Oxfam do!”.

The huge success was the infoShare App developed by Goyello mobile team. The App got very positive feedback and a great deal of visitors really used it: 1300 downloads in total: 762 for Android, over 400 for iOS and 126 for WP.