NY Techday 2014, a Major Startup Event, Was Attended by Daxx 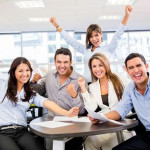 For the second time, this year Daxx people attended one of the biggest startup events, held in New York. Attracting the hottest young tech businesses of this startup city and beyond, NY Techday 2014 was definitely a success.

In 2014, 415 tech startups participated in the event – among them were Indiegogo, Meetup, Jibe, Contently, Toplist, and many other new brands. The number of attendees was well over 13,000, including the press, investors, and strategic partners.

The event started on April 22nd with an exclusive pre-party, where exhibitors could meet journalists, potential investors, or potential employees for their startup. The event itself was held the next day, in the course of which 16 awards were distributed among the tech startup exhibitors.

Honorable judges, amongst whom were elected officials, named Whipnick the Best New Startup of 2014. Other new companies to receive awards were emPowered, EnergyHub, Ampush, and many more.

Exhibiting at NY Techday helps startups reach many of their goals, like spreading a word about their product, attracting funding and IT talent. New tech businesses can connect with investors, get media exposure by meeting members of the press, get some early adopters, and hire top-notch IT talent.

“Quite interestingly, every second startup has difficulties finding the right specialists locally, even when they offer equity to attract the candidates,” says Daxx Marketing Manager Valeria Kokina. “There are plenty of good developers in New York, but it’s also the city of startups, so the competition for the talent is high. Our staffing model can be a good alternative to local talent for tech startups, and our goal was to communicate this solution to the NY Techday exhibitors.”

Many new IT companies find it difficult to attract good developers locally because of the competition with established businesses and other startups, or budget constraints. Python, Ruby on Rails, Front End, iOS, Android programmers are the most sought-after in New York City. Outsourcing is usually not an option for startups, because most of them want to work with their own teams on a long-term basis. Daxx’s remote staffing model can help startups solve both problems.

With Daxx’s assistance, startups get access to a database of around 30,000 developers from Ukraine and can set up their own dedicated team in the company’s Ukrainian office. An assigned consultant helps set up this team, organize their work, advises on useful tools and ways to avoid the common problems of remote collaboration.

In this way, startups receive a competent team, fully dedicated to their project, at a considerably lower cost. These developers work with them as a part of their team and for years if there is need in it. You can learn more about our solution here.