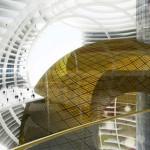 Wroclaw based IT company, listed on the New Connect stock market, finishes the last quarter of 2011, maintaining high growth rate of profit and revenues for the whole year of 2011.

Fourth quarter was the most profitable quarter in a whole year for the SMT Software again. In the period from October to December of 2011, SMT Software made record breaking net sales revenues at the level of 11,79 mln PLN, which amounts to 87 % growth rate on the IV quarter of 2010 (6,29 mln PLN). Quarterly profit came to 1,99 mln PLN, which amounts to about 17% of net revenues and 71 % growth rate on the adequate quarter of last year (1,16 mln PLN). Fourth quarter EBITDA (2,54 mln PLN) is 15% higher than the last year’s same quarter (2,21 mln PLN). 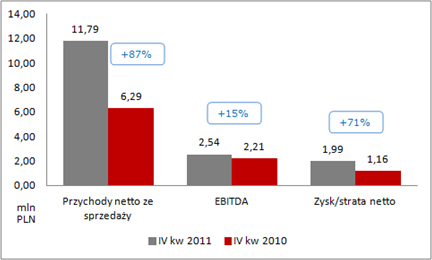 The most important of the acquired contracts was the 5-year agreement with the Cyprian financial-consulting company, regarding development and maintenance of IT systems. Total amount of revenues resulting from this contract will be oscillating at the level of 9 mln PLN. Earlier completion of project ordered on April 2012 for the EC Capital company, was also crucial for acquiring excellent financial result. Accomplishment of the works related to the MSB portal was planned on the end of 2012, thanks to its earlier completion large amount of the 2,66 mln PLN was included in the 2011 revenues. MSB shopping platform, available at www.msb.net.pl, is a first open to public, group shopping platform, dedicated to the b2b clients in construction industry.

Fourth quarter of 2011 was particularly successful for the sales of SATIS – GPS tracking system. Besides intensified marketing activities, increase in sales was also generated by the raise of petrol prices, motivating owners of car fleets to increase petrol use control and generate savings, through the implementation of eco driving systems. Another important fact was official confirmation of SATIS’s innovativeness, enabling its clients to obtain the tax reduction, related to the purchase of new technologies. 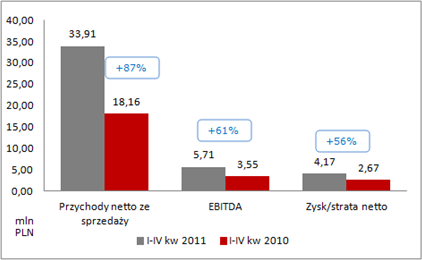 „Apart from the excellent financial results of last quarter, we are also proud of “Gazela Biznesu 2011” award – said Sebastian Łękawa, SMT Software S.A. Chairman of the Board – „Fact that our company was placed on the 15th place among 323 awarded companies based in the Lower Silesian Voivodeship and 119th place among entire awarded companies, is significant point in the history of our company.”