The Development of the eUtility System Makes Good Progress 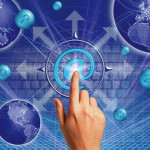 Earlier than planned in the original schedule the 3rd stage of the implementation has been recently finished and the last, 4th stage just started and is expected to be finished during this autumn.