VoIP an answer for the business segment 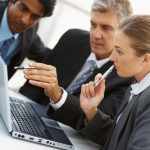 According to the PMR report “Telecommunications services for the business and carrier segment in Poland 2013.

Market analysis and development forecasts for 2014-2017”, the number of VoIP lines in the business segment in Poland has seen constant growth in recent years, to well over half a million at the end of 2013. The increasing use of this technology by Polish firms is enabling operators to offer value-added services, usually unified communication services. 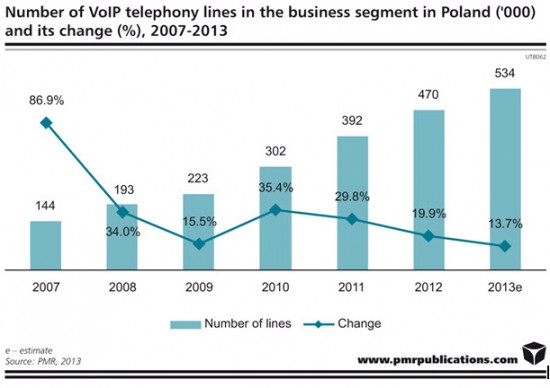 Historically speaking, internet telephony services have primarily been targeted at the segment of large businesses. At present, however, operators are concentrating more on the SME/SOHO segment when sourcing new clients. As a result, this market is mushrooming in volume terms. In 2012 a growth dynamic was at the level of 20%, and in 2013 it sustained double-digit expansion, though at a lower rate, taking the number of VoIP lines over the half-million mark.

The changes in volume on the markets of VoIP services and traditional fixed-line telephony differ and are not subject to the same trends. While the number of traditional lines is falling, VoIP services are seeing growth. As the scale of decline in line numbers is proving higher, this is bringing change to the whole market, which since 2008 has experienced less erosion in numbers of active services.

The reason for promotion of VoIP technology by operators in the fixed-line segment is not just that this service goes some way to offsetting the decline in numbers of traditional lines, but also that it prepares the ground for them to be able to offer extra services. Most of these involve unified communication packages, which can also be supplied in the service model whereby the operator cooperates with the software supplier to bring the client a wall-to-wall package of business services.

This enables the operator to bind the client to their services, and also helps to boost average revenues. For the software supplier it represents a new sales channel for their software products, and opens up a broader client base. The most commonly implemented operator-software supplier cooperation model is division of future revenues. This is an approach that takes account of the changes underway in Polish firms, which are increasingly sceptical towards purchases of large, costly telecoms platforms, and are increasingly opting instead for solutions that do not require one-off outlay, instead spreading the costs over time.

Unified communications packages are thus attracting increasing popularity. They are marketed above all to clients in the SME segment. Large companies, but also some medium-sized one, often already have company networks structured around exchanges purchased several years ago.