Moldavian “E-invoice” to be implemented by September 1, 2014 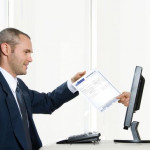 Moldavian Prime Minister Iurie Leanca requested State Tax Inspectorate (STI) to ensure until September 1, 2014, mandatory connection of 150 public institutions to the automated “e-invoice” in accordance with a decision of the Government.

Thus, in August 2014, the STI will organize a training program on the use of information system “e-invoice” for representatives of central authorities and their subordinate institutions.

Moldavian ministries and central public administration authorities, subordinated to the Government and autonomous public institutions, will take note and inform additional organizational structures within their jurisdiction about the obligatory use, since September 1, 2014, of the automated system “e-invoice” to issue invoices, and shall cooperate in this regard with the STI.

In addition, until September 1, STI will ensure the connection to the automated “e-invoice” of the ministries, central government authorities subordinated to the Government and autonomous public institutions.

The purpose of the action is to promote the “e-invoice” within public institutions, thus causing its subsequent use by private companies with which public institutions have or may have business relationships. However, the measure comes to limit the risk of corruption in the procurement process, increase transparency of public institutions and reduce their administrative costs, reads a press release.

Connecting to the automated “e-invoice” will be conducted during July-August, by the SE “Fiscservinform”. Center for Electronic Governance together with the Secretariat of the Economic Council will provide support in the process.