Developers Do not Perform Software Testing, Do They? 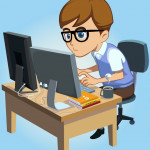 People get used that software testing is conducted by test engineers. For checking the products of every software type, there are certain specialists, for example, specialists in mobile testing, web testing or game testing.

Test engineers are well acquainted with numerous checking methods and techniques; they have enough practical skills to perform the test procedure at a high level. But automated testing and white box testing require the knowledge of some programming languages, and testers should be able to write code.

But is software product testing a field only for testers? No, developers execute testing too. It is rather difficult to write a code that will work properly on the first try. That is why developers always check and try to improve their code.

Testers pursue the goal to check whether the software product meets the client’s requirements and satisfy the end users’ needs. They detect and report any mismatches and issues. They are always sure that code is full bugs.

Developers conduct the tests to be certain that they have done everything correctly. Their basic aim is to write the code that works. Developers are always sure that their code meets the available specifications. Some developers see no sense in testing and think that it is just a waste of time.