What Does a Developer Really Do? 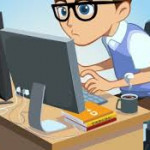 It is well-known that software testingand development processes are interrelated and interconnected. Both these procedures are the steps of software development life cycle. A lot has been said about the tester’s duties and obligations.

Now it is time to get to know more about the developer’s profession and his everyday duties. The majority of people may think that a developer just writes a code and drinks a lot of coffee all day long. But everything more complicated.

What Does a Developer Usually Spend Time on?

A lot of time is spent on defining how the system should function and on removing the errors found by the specialists of software testing company. Many developers say that sometimes it is very difficult to define the reasons of system errors. It may be rather time-consuming.

To make the process of bugs fixing easier, the developers and testers should cooperate with each other. After conducting mobile testing, desktop application or website testing, a tester knows well the peculiarities of system functioning, while a developer is aware of inner structure of the system.

Regression testing shows the results of fixing procedure. If a developer does not remove the bug or makes some change of the code that cause new errors, a tester will find it out.